The Life of Giovanni Piancastelli 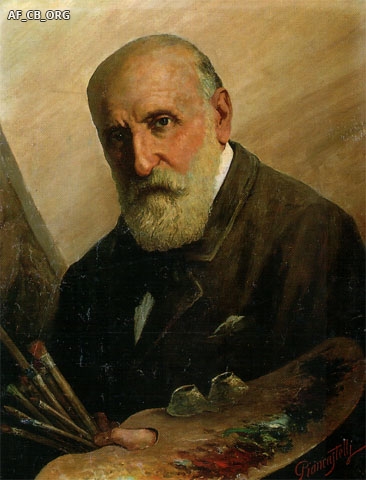 1851. His sister Vincenza, who later marries Annibale Valli, is born on October 9th

1854. His brother Francesco, who later marries Orsola Galeati, is born on March 4th

1860. He enrolls at Faenza’s Scuola di Disegno under the direction of Achille Farina, thanks to the intervention of Counts Giuseppe Rossi and Domenico Zauli Naldi.

1862. He finishes his studies in Faenza and relocates to Rome as the guest of Duke Camillo Zacchia. He becomes an apprentice of Guido Guidi.

1864. He enrolls at the Accademia di S. Luca where he is the apprentice of Francesco Podesti, Alessandro Capalti, Vincenzo Pasqualoni, Annibale Angelini, Francesco Coghetti and Antonio Sarti.

1865. He wins an architectural competition at the Pantheon, which has been announced by the Congregazione Pontificia dei Virtuosi.

1866. He leaves Rome on April 3rd in order to complete his military service, which lasts five years. He spends the first few months in Tortona.

1867. He serves as an infantryman in Mantova.

1869. He serves as an infantryman in Siena where he attends the Accademia di Belle Arti, which is directed by Luigi Mussini.

1871. He is dismissed from his military service on April 12th. He returns to Rome and is hired as a teacher of design and painting by Prince Marcantonio Borghese.

1875. He participates in Faenza’s Esposizione Romagnola and is awarded two silver medals and a diploma.

1878. He attends Paris’ Esposizione Universale with the painting entitled Gli emigranti della campagna romana (The Immigrants of the Roman countryside).

1883. He attends Rome’s Esposizione Internazionale as well as the one in Monaco of Bavaria with two paintings focusing on the theme of immigration.

1886. He receives the assignment of reorganizing and transferring the Borghese collection to Villa Pinciana. He directs the restructuring of the castello di Cafaggiolo.

1889. He is nominated for Accademico d’onore by Bologna’s Regia Accademia di Belle Arti on June 17th.

1894. He travels to Prague in order to gather information in preparation for the execution of the “pala” entitled La morte di S. Giovanni Nepomuceno, which was commissioned by Prince Giulio Torlonia.

1895. His nephew, Pasquale, the son of his brother Francesco, is born in Bologna on March 11th.

1896. Corrado Ricci commissions him several designs for the story of Il Passo della Badessa (The Passage of Badessa), which are later published in the magazine entitled “Emporium”.

1898. He attends the Esposizione Berniniana as both an artist and a collector. He attends Turin’s Esposizione d’Arte Sacra with the “pala” entitled Sacra Famiglia (Sacred Family).

1900. He participates in Florence’s Concorso Alinari with the painting entitled Madonna col Figlio (Madonna with Child).

1901. He makes the initial contacts for the selling of his collection of designs.

1902. He is nominated as the Director of the Galleria Borghese on January 6th.

1905. He sells the last unit from his collection.

1906. He is nominated as a Knight of the Ordine dei Santi Maurizio e Lazzaro on May 6th. He leaves his post as the Director of the Galleria Borghese and retires to Bologna in his new home on via Saragozza.

1908. He participates in the first Biennale Romagnola d’Arte in Faenza.

1910. Prince Torlonia accompanies him on a trip to Umbria and Tuscany in July.

1911. He attends the fifth Mostra d’Arte in Faenza with various designs created by pen.

1917. He donates a self-portrait to the Uffizi.

1919. He sells four hundred designs from the Bolognese school to Antonio Certani a musician from Bologna.

1925. He donates a self-portrait to the Galleria Borghese.

1926. He participates in Imola’s fourth Mostra di Belle Arti with thirty-six designs created by pen.
He dies on September 23rd in Bologna.

Gallery of works by Giovanni Piancastelli