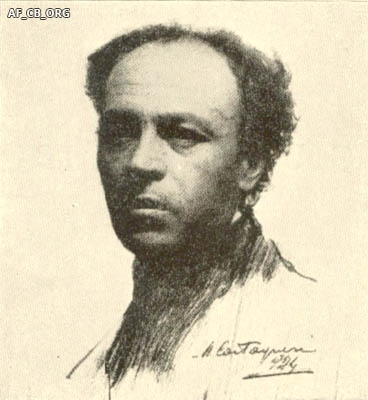 1881 – Giuseppe Guidi was born at Castel Bolognese (RA), on September, 15th. His parents were Luigia Galeati and Mario, a pork-butcher.

1894 – He began to attend classical studies at the Regio Ginnasio Torricelli in Faenza.

1899 – A rebel character, he gave up his studies and entered politics; an active anarchist he joined in the groups “Diritto all’Esistenza” of Castel Bolognese.

1901 – He earned his living stuffing animals.

1902 – He left his native country; in July he worked as an electrician in a sugar-refinery at S. Giorgio di Nogaro (Udine).

1905 – During his stay in Trieste he was expelled as a suspected anarchist owing to political events.

1908 – After short periods in several European cities (Vienna, Budapest, Paris), where he began his artistic activity, he settled in Milan definitively towards the end of the year; he attended art evening courses at Brera together with the ceramist Pietro Melandri from Faenza.

1909 – In April he lived in via Felice Cavallotti n. 18. He left politics and contributed to several reviews among which “Per l’Arte” (from 1909 to 1915). He wrote the libretto of the operetta Velivolo, the composer was the maestro Virgilio Ranzato.

1911 – He worked in the ribbon and braid and embroidery factory of Luigi Mori. His parents and his brother moved to Milan.

1912 – In October he moved to via S. Damiano n. 6 and in his studio in via Stella n.45 he devoted himself entirely to painting and to his first studies of etching.

1915 – He volunteered for C.R.I. (Italian Red Cross) and took service in the Ospedale Militare Principale in Piazza S. Ambrogio; compelled to leave the studio he worked at home.

1918 – After World War the First he opened a studio in Corso Venezia 57, devoting himself also to studying the art of coating copper with enamel of which he will became a deep expert.

1919 – He contributed at the issues of “L’Eroica”, forty xylographies of his own were published in the volume Ali Alati and six (more fifteen capital letters) in the volume La canzone dell’offerta.

1922 – He moved to Via Vivaio n. 16, where he opened printing a work shop. He exhibited some of his etchings in a collective exhibition in Cremona.

1923 – He showed a series of fifty etchings at the Galleria “La Vinciana” in Milan, selling all the copies and gaining the first critical consents. In the same year, introduced by the sculptor Adolfo Wildt, he exposed forty-one etchings in a one-man show at the “Bottega d’Arte” in Leghorn (from October 21 st to November 5 th).

1924 – He took part in a collective exhibition in Cremona with etchings and enamels. In December he exposed sixty-four enamels on copper at the “Galleria Pesaro” in Milan; Gabriele D’Annunzio bought the Via Crucis he himself had ordered.

1925 – From June 28th to July 5th “Amici dell’Arte” in Forli promoted a one-man show with forty-four etchings and six enamels on copper. He took part in the “Esposizione Internazionale Arti Decorative e Industriali Moderne” in Paris with several works (enamels); on that occasion he was awarded a gold medal. He showed about forty etchings and twenty enamels in Bologna (from the 12th to the 19th of December) in the “Saloni Felsinei”

1926 – He was present with several works at the “Prima Mostra d’Arte del Novecento Italiano” in February and March at the Permanente in Milan. He taught etching at the R. Accademia di Belle Arti in Milan. His daughter Camilla was born on March 18th. He had a work-shop in Via Pietro Verri n.7. The “Bottega d’Arte” in Brescia dedicated a one-man show.

1927 – He took part in the “III Mostra Internazionale delle Arti Decorative” at Villa Reale in Monza (May-October); and at the “Esposizione Nazionale d’Arte” at the Permanente palazzo in Milan.

1929 – The R. Accademia di Belle Arti proposed him to the Ministero dell’Educazione Nazionale for the nomination on qualifications for the chair he had held for three years.

1931 – He was present at the “Prima Mostra Internazionale d’Arte Sacra Moderna” in Padua with two very elaborate works: a polyptych and an altar-piece respectively representing La Maestà di Dio e Remagi. On November 7th he died in Milan

1932 – At the “Mostra del Santo” in Padua an unfinished altar-piece, was presended; it was awarded a gold medal.

1951 – The Amministrazione Comunale of Castel Bolognese called a street of the town after him.

1956 – His daughter Camilla moved from Milan to Alassio.

1981 – His remains were exhumed and taken from Milan to Alassio to the family tomb of the son-in-law Emanuele Aicardi.

1991 – On the occasion of the sixtieth anniversary of his death the Amministrazione Comunale of Castel Bolognese issued the volume written by V. Donati Un artista nell’ombra – Giuseppe Guidi (1881-1931).

1996 – The town hall of Castel Bolognese dedicated an exhibition to him organized by the “Comitato dell’Antiquarium Comunale ” from 9 November to 6 January, 1997. For the occasion a catalogue was published entitled L’arte di Giuseppe Guidi (1881-1931) Rivalutazione di un artista, Castel Bolognese 1996 by V. Donati.

From 13th december 2003 to 25th january 2004, the “Associazione Amici dell’Arte” in Faenza dedicated a large exhibition to Giuseppe Guidi at “Palazzo delle Esposizioni”. For the occasion a catalogue was published entitled Giuseppe Guidi – Un artista per D’Annunzio, by Valentino Donati and Rosanna Casadio Donati, with critical contribution by Pietro Lenzini and Alberto Mingotti.

Gallery of works by Giuseppe Guidi